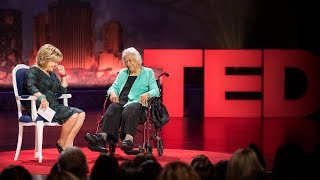 In Honor of a Great Woman Leader, Ms Leah Chase

It’s great to see all the focus, books, articles, and talk show discussions about increasing the representation of women in leadership roles. Having been an observer of corporate talent and leadership dynamics for over 30 years, I’ve seen a lot of years when the topic wasn’t even discussable – at least not in any honest and transparent way.

So now it’s on the table(s). Kitchen tables, board room tables, succession planning tables. Great. We’re talking about it, learning about why progress is slow (or non-existent). Great research and books out there about how women hold themselves back, what they need to do to advance their own careers. How cultures need to adapt to become more inclusive. How unconscious bias exists in us all, and the ways to prevent that from getting in our way. All great.

Some of the things we’ve learned. This may be the slowest, toughest culture change we've ever attempted. Because it is complex, often subtle, and many of the reasons why it's so hard to change are difficult to talk about. Hard to change what we can't acknowledge and discuss. So I'm putting some observations on the table.

One of the big reasons why white men have landed the big jobs more often than women (and men of color) is that the ones making the decisions are mostly white men. You know, it’s about how we all like to hire or promote people who are like us, who we feel comfortable with, whose strengths and work styles look and feel like our own. Even in recent years, since we’ve known better, we haven’t always done better. We’ve allowed the comfort of the top decision makers to prevail. It's only natural, they are in charge. It is much easier for those in power to ask others to change.

I’ve seen this play out over and over, along similar storylines, in big companies. The guy that the succession/selection decision team knew best, got the job. “Knew” often didn’t reflect a deep understanding of their strengths, leadership capabilities, reputation, leadership impact in the organization, nor evidence of their potential to succeed at a higher level. “Knew well” often meant they had interacted socially, been in many of the same meetings, followed a similar career path, worked for some of the same leaders, played golf or had some drinks at the bar, or talked sports with them. Frequently, all of these on the same day. (NOTE: some of these are places where women were not invited, or maybe where they chose not to participate in the "optional" activities due to family needs or lack of interest in the sport or the drinks. Women didn’t get to participate in creating the rules for career networking.)

White men have been promoted for their potential. Others had a lot more dues to pay, hurdles to pass. The stories I have heard! The personal experiences I had! Women and people of color who got promoted had much more experience, flawless performance, and were provided far fewer true stretch opportunities to learn and show what they can do, than their white male peers. That comfort thing, again. "Let's give John a chance. He's a good guy."

And it plays out from there.... the familiar white guy with potential got the promotion. Along with it, lots of interaction, support and leeway from his bosses and peers – cuz, you know, he’s one of them. When he faltered or failed, he was often given a second chance, and if he was lucky some kind of veiled feedback. And if he still failed he was often “transfired” into another, less important role in the company.

The woman or person of color who finally got that job after years of her talent languishing in lesser roles was too often observed from afar: “let’s sit back and see how she does...” Those who promoted her weren’t all that comfortable having honest conversations with her. Often expectations were not communicated, there was little or no support or coaching, less interaction in general. Sink or swim.

She did what she thought was expected (she wasn't told and didn't dare ask), which was work longer and harder, know every little detail, quietly do it all, perfectly. And keep in mind she’s already older and further along in her career than her male peers, and that has its own challenges. And the bar was higher for her performance, while the range of acceptable behavior narrower. Many got labeled either “too nice” or “too bitchy” while men displaying similar, or even worse behavior patterns were accepted, even revered. If she struggled or failed the response was frequently to distance her even further, avoiding confrontation. And, just maybe, unconsciously, avoiding the complex under-the-surface reality that company leadership was complicit in her failure. And she got fired or quit. And, remember, it’s getting late in her career...

(I debated about whether to write the above scenarios in past or present tense. There can be truth in it either way. But I like to think of it as “the old days,” even if we still have a long way to go. Your current reality may vary.)

So the only way to change that is to change that. Not via unconscious bias training, or women’s leadership networks, or assigned mentor programs. These can be really helpful. But they haven’t gotten us there yet. We have to just do it.

Just do it. What would that look like? Like Sallie said in the video: CEOs and other executive leaders would insist on placing more women and people of color in senior roles. A critical business goal with a compelling purpose. Robustly apply the same standards to all, insist that discussions in talent reviews are fact-based, current, and use the same behavior or character descriptions for all. Promote more women. Promote women for their potential, not their years of service. Take reasonable risks on your most talented women, at every level. Give them the stretch assignment along with a good coach to help them succeed. Seek out, develop, and celebrate women who lead, who make things happen. Period.

Hold leaders accountable for doing that, from the C-suite to the front line. Track progress, just like everything else that matters in business. Every year there must be significant improvement in the numbers of women and people of color in every layer of management.

And provide the leadership guidance and transition assistance needed for success at the next level. This should be done for everybody, anyway. What got you here won’t get you there. Provide coaching, clarify expectations, educate about the different ways of working needed at the new level of leadership (like delegating more, giving up perfectionism, thinking outside your own silo). Help newly promoted (or hired) leaders develop the connections, partnerships, and sounding boards they need. Make sure they are getting helpful developmental feedback and learning as they go.

A company that’s doing it, right now, is one of my clients, a multi-billion dollar, old-industry, very white male dominated giant. They have promoted ten women into key executive roles at a critical time in the business’s evolution. Ten women is a big deal here. Women now represent nearly 1/3 of all leaders at the top two levels of the company.

And they are providing deep support. I’m working with them to develop and implement an experimental 16-month program that is a combination of individual coaching, deep self-awareness building, leadership development, whole business strategic thinking, atypical dialogues with the CEO and board members. Plus a group assignment that will stretch them to lead the entire organization in creating changes needed to ensure sustainability of the business. They will develop strong relationships with each other as we go (a critical success factor often lacking for women leaders). And they will determine the direction and content for much of the program. All in small bites over time, so that they can use what they are learning, show up as better, more authentic leaders now, and succeed in their new jobs.

Yes, there will probably be unintended consequences and challenges – like how male peers and C-suite bosses respond, and whether the women’s development as executives will keep pace with the challenges/stretch being asked of them. And shouldn’t we be doing something like this for leaders of color? And shouldn’t they have had this kind of development years ago? Yes, we’ll have to deal with uncomfortable issues. All part of the brave experiment and well-calculated talent risk this company has undertaken.

If you'd like to do more, or do better, in advancing women leaders, get in touch for a free initial consultation.